Film and Video regular programme “What is Film?” presents series of screenings and talks aiming to set up the basis of long-term programming, research, and presentation of outstanding audiovisual works, defining the broad palette of the art of film in all of its contemporary spectrum.

On a feverish night, a child perceives a ghost, a woman who has come from the sea, coming home after a long political exile. Silent tales, bodyless voices and visions mingle in the dark of the night and the fever. The child of the present and the political refugee are now one, travelling together to a strange building haunted by lost memories. History of decolonization and forgotten political fights appear and disappear. But a new struggle, the Arab Spring of Morocco, floods the past.

Public Lecture: What is Film? / Safia Benhaim, moderated by Christophe Postic and KumjanaNovakova

One night, a man tells his children a strange hunting story: the disappearance of his friend Jonathan, who went alone into the forest to track a stag which obsessed him. Haunted by this disappearance, the man then goes back to hunting in the remote mountains, where his friend vanished.

At night, as the man hears a stag bellowing in the woods, he comes face to face with his long-lost friend, Jonathan. In the dark of the forest, Jonathan tells him about his quest to track down an invisible beast. 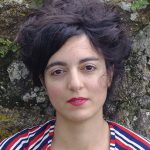 Safia Benhaim is a filmmaker. As a daughter of Мoroccan political refugees, her films – shown in film festivals as well as contemporary art circuits – explore the question of exile, and the strange areas between documentary and haunting fiction. Her film La Fièvre won a Tiger Shorts at the prestigious International Rotterdam Film Festival.

Film and Video’ What is Film? Programme is curated by KumjanaNovakova.