Driton Selmani: The Barking of The Clouds Does Not Hurt The Dogs

The Barking of the Clouds Does Not Hurt the Dogs is the title of Driton Selmani’s first solo show in the Republic of North Macedonia opening at the Museum of Contemporary Art -Skopje. The exhibition is a result of the MoCA-Skopje 2021, Biennial of Young Artists Award given to Driton Selmani in the form of a solo exhibition.

Presenting a diversity of works in a selection of already existing works and a site-specific intervention in the space of the MoCA-Skopje, the exhibition of text-based works, objects, and video, tries to establish new relations in the given context, clearly shows the ways in which Selmani wittily uses a specific form of humor to investigate and question the familiarity of everyday, usually bound in absurd traditions and hierarchical structures.

Selmani’s wide array of works focuses on diverse issues of our contemporary predicament ranging from popular culture to the dominant discourses of power that are shaping our lives, questioning historical narratives, stereotypes, the sense of belonging, and exclusion.

Driton Selmani’s works are always constructed as an imaginary dialog, either with an audience, or even with oneself, as a series of short statements, or probing rhetorical questions, opening new perspectives to our understanding of ourselves, the commons, and different aspects of contemporary life.

The very title of the show, makes it clear how Selmani uses unexpected juxtapositions and irony – twisting a Berber prober, with a reference to a verse from one of his favorite poems Stranger (L’Etranger) by Charles Baudelaire. In fact, he deliberately seeks and finds the points where language breaks, it opens a gap, a crack between the things, the words and the newly constructed image, transforming the familiar into a weirdly unique situation, and then back from the fictitious to the understanding of the everyday.

Intervening in the realm of language, from old popular wisdom to poetry and children songs, Selmani’s practice touches upon the fears, troubles and worries expressed by ordinary people. He aims at deconstructing the underlying structures and the internalized cultural constructs in order to understand them, thus offering us a unique possibility to stand together and be confronted with powerful visual works with masterful simplicity. Dwelling in this state of strangeness where the poetic and the political intersect he is far from being a stranger, but instead finds his home. 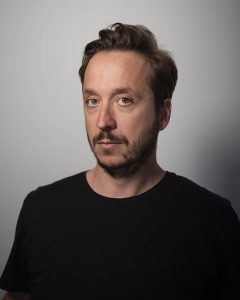 Driton Selmani (Ferizaj, Kosovo / 1987) currently works and lives between Prishtina and Doganaj. He completed his MA studies at the Arts University Bournemouth, UK. Selmani approaches the idea of perceived reality by deconstructing formations of social, political, and cultural topics that have been embodied around him. At a young age, he was told to worship a country that no longer existed, which caused him to form a basis of skepticism towards any supposedly given reality. He later used this as a beneﬁcial tool to reconstruct his beliefs into visual artefacts. In 1999, old simulacra have been replaced by new ones; the ornaments of a previous space have been refurbished to unfold with new meanings, but also new uncertainties. Selmani confronts himself as a spectator of this “on-going event” and positions himself as an actor, enacting his performances based on his personal histories, beliefs and doubts. He has exhibited at solo and group exhibitions (in the Stacion Center For Contemporary Art Pristina, Ludwig Múzeum in Budapest, Kunstraum Niederosterreich Vienna, Casa Contemporanea São Paulo, Mediterranea Biennial 16 Ancona, U10 Belgrade, 5th Marrakesh Biennale, Amsterdam Light Festival, Fabbrica del Vapore Milan, Bregenz Biennale, Exchiesetta Polignano a Mare, National Art Gallery Tirana, Thessaloniki Center of Contemporary Art, Eugster || Belgrade, Norrköping Light Festival, Kunstmuseum Basel, as well as at 14th Manifesta in Prishtina 2022).

Contemporary Ecosystems: A Quest Between Art and Ecology in North Macedonia