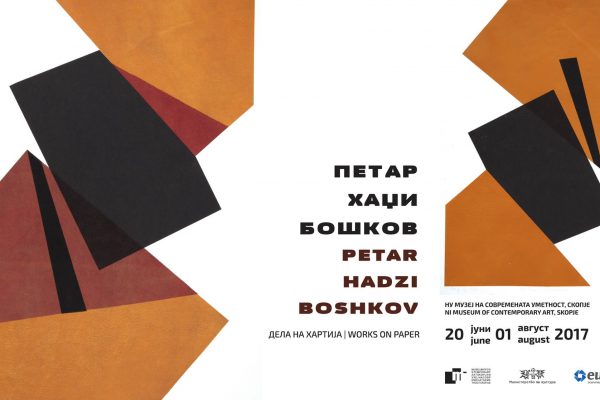 The Museum of contemporary art has the privilege to present the retrospective exhibition Works on paper from one of the most significant Macedonian sculptors Petar Hadji Boskov (Skopje 1928 – 2015). The works on paper for the first time presents the creation of Hadji Boskov seen through the prism of his drawings and graphics, as amajor part in the foundation of his sculpture opus as well as an autonomous component in establishing his artistic and personal achievements. Hadji Boskov is exceptionally rich in his artistic creation. During the fifty years of his work he created over 2000 graphics and drawings, artworks that are constantly presented on his solo exhibitions at home and internationally which won him numerous awards in the field of graphics. This part of his creation, so far, is solely presented only during his first retrospective exhibition in the Museum of contemporary art in Skopje back in 1989.

The exhibition Works on paper includes an enormous selection of over 300 graphics, drawings, graphic maps, sketches, studies and collages, some of which significant cycles and projects of the artist will be exhibited for the first time in front of the general audience. For example, on the exhibition the audience will have the opportunity to experience the last great cycle of extremely suggestive monotypes and drawings titled Psycholandscapes, created between 1998 and 2004, as well as the sketches and preparations for the project. The end of the century worked for the unrealized participation of the Venice Biennale in 1999. However, apart from them, there will be a large amount of unexhibited or for the younger audience unknown cycles and individual works. The exhibition will include a small amount of sculptures as a referent points in relation to the Works on paper.

The title of the exhibition Works on paper signifies the style and the techniques which Hadji Boskov applies in this method, and shows that no matter whether it’s about graphic technique or a simple sketch which will be a base of an idea, the approach of the artist is like towards separate and fulfilled work of art. The universal subjects of the human body or a figure, land or landscape and cosmos or space, subjects that Hadji Boskov artistically elaborates in his impressive sculpting creativity, mainly with the aid of the rhythm of the light and shadow, which in the Works of paper they have special strength and meaning, not only because the craftsmanship of the artist with the drawing and the graphic techniques, but also because of the specifics of the media that includes larger narration and symbolic in the presentation of the same.The curator of the exhibition is Zoran Petrovski. Regarding the exhibition a representative catalogue will be issued with the essays by art historians Liljana Nedelkovska and Lazo Plavevski writing about the works of Hadji Boskov Petar and his significance for the modernism in the Macedonian culture.

General sponsor of the Museum of contemporary art and for the printing of the catalogue for the exhibition is Eurolink Insurance.

Your ticket for the: Works on paper | Petar Hadji Boskov | Retrospective Exhibition