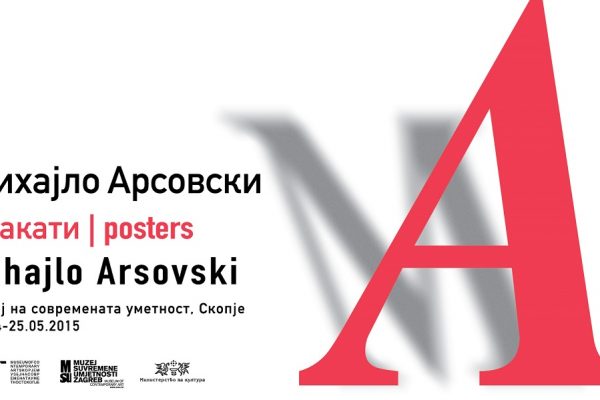 As an art form, the poster is a work of the street – it belongs to it. The poster reaches its apogee on the city billboards, purpose-built concrete blocks, and fences. Yet, from amidst this mélange, the poster should be functional so that its role is performed clearly; it must attract, direct, arouse interest in a particular group of people, and reach the wider public. A poster must inform, educate, induce sighs, provoke certain emotions. A poster is a play on signs, symbols, messages… It is here that Arsovski demonstrates a seriousness in this play, imposing stylistic forms, photomontage, collage, as well as bold typographic solutions, through a play on consonants and vowels. His posters evince the influence of the Swiss style through the play with whiteness, or the so-called “white space”, as well as the influence of the Polish school, especially on his theatre and film posters.

Of course, at that time Arsovski did not need to impose himself by means of his expression per se in the way that designers nowadays have a need to be imposing and strive for an ever greater visual shock. On the other hand, he also offered quite intriguing renditions and entirely unexpected links between words, letters, and signs. Intertwined in his play is the expressiveness of colours that shapes the entire content, inspired by ‘60s pop culture, thus weaving them together into colourful posters. These elements can be discerned in the works selected for this exhibition.

His creation for the Pop ekspres newspaper (1969) foreshadowed the future graphic language of the culture magazine, which would emerge during the 1990s.
The interpretation of his designs is made difficult by his ironic and negative attitude towards his own work.

According to Jasna Galjer, the authoress of his monograph, “some of his works are in museum depots and private collections, but no systematised catalogued inventory exists, and even the available facts are scarce, while many of his works have been lost in the meanwhile, which adds to the issues faced by art history in the present”.

Arsovski has also designed several books, graphic maps, album covers, and magazines, where the lavish expressive typography is complemented by strict functional solutions that represent some of the highest achievements in local design. In his creative ideas for the ITD Theatre from Zagreb, where his oeuvre contains more than 200 posters, by employing total design for the first time, he managed to establish the visual identity of the theatre.

Mihajlo Arsovski played a key part in the education of numerous young Croatian designers during the ‘80s, such as Mirko Ilikj, Dejan Krshikj, Nikola Gjurek, etc. This was a period when no appropriate education in typography existed in Croatia.
This great artist, who broke stereotypes, raised his voice against the communist society of the time, rarely appeared at the exhibitions where his works were displayed, declined the lifetime achievement award in Zagreb, deserves to be paid all due respect, to be shown gratitude for his vision, and to be given a promise that he shall not be forgotten.

Mihajlo Arsovski is the first author in the Forgotten Macedonian Artists series. The aim of this series is to highlight the significance of the Macedonian artists who have contributed to the establishment of the art scene outside their homeland, yet, unfortunately, have not received sufficient exposure or been paid the homage they certainly deserve within it. Artists who must not fall into oblivion, not only due to the cultural legacy they have bequeathed, but also for the sake of future generations who can thus familiarise themselves with these artists, possibly for the first time.
Therefore, MCA will make efforts towards presenting an author each year.

Your ticket for the: Mihajlo Arsovski – Posters