Del LaGrace Volcano is a photographic visual artist  producing work that seeks to disrupt and trouble socio-cultural binaries using visceral pleasure and political provocation as a primary strategies of resistance. Volcano was born intersex but assigned and raised female from birth, living the first 37 years of their live as female. They have been living as non-binary and openly intersex since 1995. Del earned an MA in Photographic Studies at University of Derby, UK in 1992 after studying photography at the San Francisco Art Institute from 1979-81 and Volcano has produced five photographic monographs, from LoveBites in 1991 to The Drag King Book in 1999 with Jack Halberstam  to  Femmes of Power: Exploding Queer Femininities in 2008 with Ulrika Dahl. 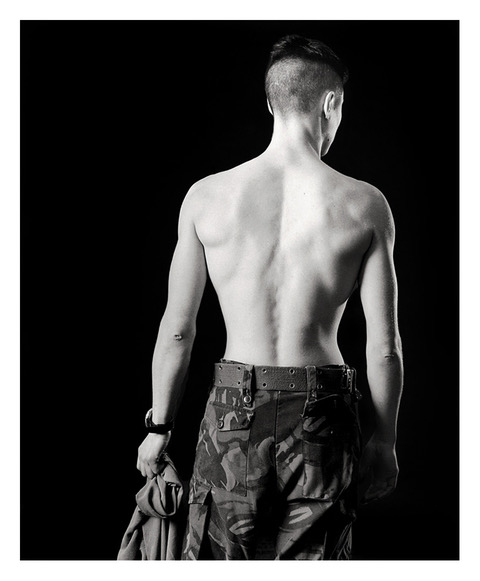 Volcano is considered one of the world’s leading queer cultural producers and is currently working on issues relating to intersex visibility, gender as a system of compliance, norm critical parenting and how to create community across cultural divides.

The international photographer, Del LaGrace Volcano, has over a thirty year period made a consistent subject of gender variance, sexual connectedness and body mutations.  Volcano’s photography has staged the constructedness of gender and rich diversity of body morphologies available to those who are really willing to look, in ways that have resonated deeply with—and moreover that have often preceded, influenced and crucially brought together—emerging lesbian, queer, trans and intersex theories. Volcano is exceptional as a photographer and thinker in being concerned to show gender/sex as both highly performative and intimately embodied…… In Volcano’s own gender journey, gender is not so much transformed as transmogrified, as I have argued elsewhere, that is, metamorphosed constantly, its strangeness repeatedly elucidated. More than any other artist Volcano’s oeuvre has presented queer, trans and intersex people as subjects rather than objects, since Volcano’s images are created through looks of identification, affiliation and desire, exchanged between the sitter, the photographer. Volcano has approached photography knowingly, as a kind of mirror-a hard plastic surface for identification and love. – Dr Jay Prosser 2016

“I was once told, by a fellow photographer, that I was a “student of my own condition”. I interpreted this as a compliment and an astute observation. A true story. I have always been the first subject of my work, sometimes directly and sometimes indirectly through the lens of desire and/or affiliation. The way I live my life dictates what work I make. You could say I am an immersion artist. I live my life and make photographs of what I find important and empowering around me. I look and give myself permission to look and to see and to change how I see throughout this time/space continuum we are all spinning on. ”

“As a gender variant visual artist I access ‘technologies of gender’ in order to amplify rather than erase the hermaphroditic traces of my body. I name myself. An intentional mutation and intersex by design. I believe in crossing the line as many times as it takes to build a bridge we can all walk across.” – Del LaGrace Volcano

The exhibition is part of Skopje Pride Weekend 2018 – Queering the Political, organized by Coalition MARGINS and the LGBTI Support Center, in partnership with the Museum of Contemporary Art. Supported by Heinrich-Böll-Stiftung, Open Society Foundation Macedonia, Ministry of Culture of the Republic of Macedonia , the European Union and the Museum of VContemporary Art, Skopje.

Your ticket for the: Del LaGrace Volcano: CORPUS QUEER: Bodies of Resistance 1980-2018