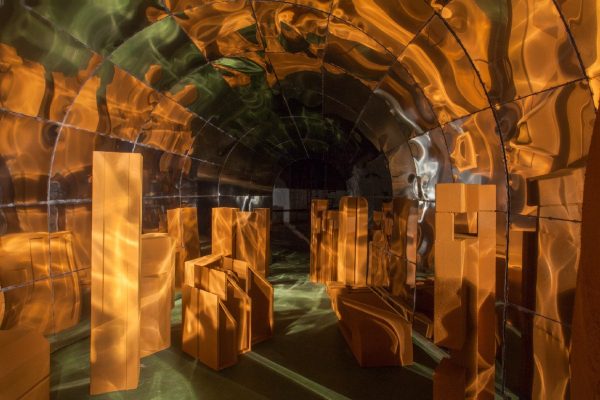 The relationship between the “public” and the “private”, the “cataphatic” and the “apophatic” space is the “No Man’s Land” womb. Its primary concern is the structural perichoresis, correlation, and juxtaposition of distorted yet allusive “iconic” urban landmarks and the author’s creations of subjective realities, fragmented and dematerialized micro locations, geographies, and multicultural explorations of form and volume. The sublime interplay of interarchitectural echoes and allusions allures us to diagnose the neuroticisms of our cultures through the architectural cryptograms of the phantasmagoric “open city” created as an eschatological architectural cry/riddle about the possibility of liberté, égalité,fraternitéin toto.
The spectator, entering the tunnel through the illuminated “back door” will be confronted with images and symbols of the great human expectations; a city “recognizably unrecognizable“, ephemeral as a “dream about a city“, the horrific illusions of “land without borders“ extending the invitation to immerse oneself into the no man’s landscape.
At this intersection, the neurotic obsessions with possession and accumulation meets the brave old art of dreaming. What quantum of courage does it take to look at this architectural mirror? What amount of will-power is needed for one to take up the dislocated yet liberating disposition of global nomad/migrant or a proud citizen of the land that is everyone’s and no one’s? To what extent something that we possess can be called “our own”?

The project does not spare the architect and myself as one of its authors from self-examination. Do we by an “architect” mean a socially isolated figure with an insular approach focused on the quality and aesthetics of living or do we accept her as a fellow-citizen who has a public and private responsibility in addressing crucial social issues while offering visionary resolutions?

Register for Exhibition: No Man’s Land

Your ticket for the: No Man’s Land