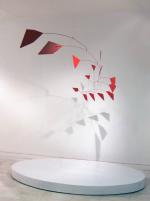 Skopje is not a film, not a thriller where we guess the chief event. It is a concentration of man’s struggle for freedom, with a result which inspires further struggles and no acceptance of defeat.

When Skopje was destroyed by a strong earthquake fifty years ago, the tragedy that struck the city was not only the day’s top headline (to be substituted the following day by a newer, even more traumatic top story) but an event that mobilized an enormous wave of sympathy and solidarity. This potential carried within itself a utopian aspect: the aspiration was not only for Skopje to be rebuilt but for it to become a modern city. The plan of the Japanese architect Kenzo Tange for a new Skopje was conceived as the start of a new future, while the creation of the Museum of Contemporary Art was a type of symbolic passage into the future intended to serve as a promise, as an expectation of a projected, utopian fervour.

The exhibition Solidarity – an incomplete project? is conceived as a symbolic repetition of the act of the Museum’s creation through a re-enactment of that act of giving, as well as the purchasing policies of the museum’s team of experts. This re-enactment in a way reconstructs the formation of the Museum’s collection from the period of its establishment in 1964 to the present. However, repeating the creation of the Museum does not denote a return to nostalgia for the past but stands as an attempt to emphasize the importance of this event not just in the context of the past but, more importantly, in the context of the present. Here the reference to the past is not а historical overview made for the sake of history itself; rather it addresses the importance of past events for our present and future. It also highlights the importance of asking ourselves if it is still possible to believe that somewhere within us lies a utopian spark worth preserving: a spark necessary not only for great changes but sometimes needed in order to persevere and to continue to defend the abandoned or forgotten idea of solidarity.

Solidarity – an incomplete project? includes about 300 works from the collection of the Museum of Contemporary Art. Due to renovation work on parts of the Museum, it has not been possible to present this collection for the past twenty years. With the completion of this renovation work, however, we are now able to exhibit part of this rich collection.
The exhibition explores the relationship between art and the city, politics and history, catastrophe and solidarity. At the same time, the exhibition aims to present a vision for a more dynamic and engaged role for the Museum in shaping, motivating and encouraging artistic discourse and art criticism. The exhibition does not claim to provide a final and sealed view of the character of the Museum’s collection, but aims to open up possibilities of presenting various aspects of the collection’s development. On the one hand, this presentation highlights the fragility of values and inconsistencies in regards to projective vision. On the other hand, it points to the need to continue believing in the possibility of projective vision as an open, value-adding process and as a desired truth. Hence, the exhibition is also an attempt to open new, different perspectives on the concept of solidarity, a concept upon which the Museum of Contemporary Art in Skopje is founded.

The title of the exhibition refers to Jürgen Habermas’s well-known lecture Modernity – An Uncomplete Project which is an attempt to critically position and redefine the Museum’s collection––a collection that contains a large amount of works bearing the signature of solidarity, a signature rising the ruins of the 1963 Skopje earthquake. The project of solidarity was conceived and implemented in 1964 and reached its peak in 1970 with the opening of the first Permanent Collection in the new building of the Museum—a building designed by three Polish architects, Mokszyński, Wierzbicki and Kliszewski, as a gift from the Polish Government. At that time, the collection of the Museum included a total of 2,050 works—including paintings, sculptures, objects, drawings and prints—by 1,020 artists from 40 different countries. And gifts continued to arrive over the years that followed, albeit with less intensity. As a result, the number of works in the collection had increased to 3,543 by 1985. However, although the collection continued to be complemented through the donations of several benefactors of the Museum, but also with the help of letters the Museum addressed to various artists, it became clear during this period that the “strategy of donations” should be replaced with acquisitions policy by purchasing works of art mostly from Macedonian artists and occasionally by foreign artists.
How should this above realization be understood? Should it be seen as an acknowledgement of the spent impulse of “utopia” that the project of solidarity used to contain (if one reads solidarity as a promise and a responsibility of the Museum to grow and develop into a museum of international solidarity)? Or as a realization that substituting one project (the act of giving as a sign of closeness and attention) for another (procuring as a process of distance and assessment) does not necessarily signify a departure from the ideal of solidarity? Is there a possibility that this “lost” and “interrupted” solidarity can be retrieved and repaired in the future? These questions still remain open as well as delayed so that responsibility can receive a response; not in order to avoid a responsible response, but to avoid the habit of posing questions that suggest the manner in which the response should be heard, understood, and accepted.

Hence the title Solidarity – An Uncompleted Project? If the 60s and 70s saw the creation of an international collection that grew slowly and sporadically, then it seems logical to question the perspectives of the Museum’s collection of contemporary art. The reason why the museum and solidarity are thematically connected by the phrase incomplete project lies not only in the responsibility, at the 50th anniversary of the Skopje earthquake, to remember with gratitude the great help and support our country and city of Skopje received from many countries all over the globe; we must also ask ourselves what contributed to the project of solidarity being halted and forgotten. Solidarity in this sense should be understood not only in its most common use, but also in its utopian, emancipatory and globally democratic potential. And it seems that there are always a multitude of reasons. One reason always hides behind another, and what seems to be clear can in fact never be fully comprehended by and in itself. Just when we think that the seams have been neatly sewn up, they tear apart and holes appear from which things left unsaid begin to seep and become rearticulated, this time in new and different ways and for all sorts of reasons.
Thus the word solidarity, which is in fact the primary name of the Museum of Contemporary Art. Regardless of attempts to limit the word and reduce it to local issues and problems concerning this institution, the polysemy of the term as well as the uncertainty in its treatment—an uncertainty brought about, not by the deficit but by the inflation of its rhetoric use—is another reason for opening up this term so that the wealth and diversity of its semantic and narrative potential can be seen. It is through this potential that the Museum should address the multitude of questions which the project of solidarity exposed: the responsibility not only of receiving but also of giving; to maintain but also to expand the experience of solidarity as an experience of creatively connecting and opening new perspectives of unity and friendship (a type of “community without a community”); and also as a readiness to bring into being and highlight the artistic impulse of critically evaluating and transforming reality and society.

Your ticket for the: Permanent Exhibition: Solidarity – An Uncompleted Project?