SKOPJE PRIDE WEEKEND 2019
GLITTERING WOUNDS
– Relations, Vulnerability, Resistance –
Skopje Pride Weekend 2019 will be held for the 7th time, organized by the Coalition MARGINS and the LGBTI Support Center (Helsinki Committee of the Republic of Macedonia). The goal of the series of events in the frames of the festival is to create spaces for presentation and promotion of non-normative forms of worldmaking, that is to say relations, affects, identity positions, bodily styles, life forms and sensibilities that have been marked, by the heteronormative, nationalistic and neoliberal capitalist context, as queer failures.
The specific goal of the 2019 edition of the festival, Glittering Wounds, is twofold. One the one hand we want to explore and problematize the contemporary hegemonic political imaginations, practices and subjectivities of the isolated, possessive, decisionist, privatized, rationalist and self-sufficient individual, and their entanglement and constitutive dependency on normative frames and representations of gender, sexuality and neoliberal capitalist ideologies. On the other hand, our goal is to explore, present and promote the various non-hegemonic world-building projects and historical, social and political lived experiences of queer people and women, as sources for imagining alternative social and democratic horizons based on relationality, solidarity, care and transformation beyond the normative limits of identitarian recognizeability. 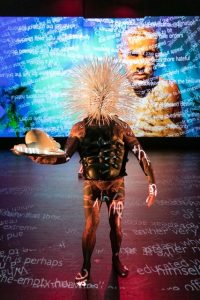 7 June (Friday)
21:00
Museum of Contemporary Art
Acephalous Monster
Ron Athey
Best known for his boundary-pushing body mutilations, Ron Athey has been pursuing the transcendent and sublime for more than three decades. After the Death of God (famously proclaimed by the philosopher Nietzsche who anticipated the end of religion in Western society), Athey considers it one of the artist’s roles to invent new forms of ritual and celebration, to conjure the sacred as an antidote to the empty individualism of contemporary life. For his new work, Acephalous Monster, Athey turns to the Acéphale, the figure of the headless man, which inspired George Bataille’s secret society of the same name to combat nihilism and fascism before the Second World War in France. The headless or beheaded man is a powerful symbol of radical transformation, the driving force of all of Athey’s performances pushing towards the merging of humans and gods.
Acephalous Monster is a solo performance with projections, readings, lectures, appropriated text and sound.
Ron Athey is an iconic cultural figure who started in performance in the early 1980s in context of L.A.’s underground music scene as a duo with Rozz Williams of Christian Death. In 1990 during the AIDS pandemic, he started showing individual and group works at art spaces like LACE, PS122, Highways, Randolph Street Gallery, and ICA London. Three major works comprising The Torture Trilogywere AIDS memorials about the nature of healing—tapping into the historical archetypes of religious painting and deity worship. The content of this work looked at the dead at what healing could be. These works toured worldwide throughout the 1990s, with themes such as Christian martyr saints, putting forth philosophical questions about the nature of identity, and questioning the limits of artistic practice. A monograph of his output was published in 2013: “Pleading in the Blood”, edited by Dominic Johnson. In 2005 and 2018 he collaborated in experimental opera projects with soprano/musicologist Juliana Snapper, and Sean Griffin, opera composer. In 2018 he premiered Gifts of the Spirit, an opera made from automatic writing in layers leading up to real-time. A new collaborative work premieres December 1, 2018 with Cassils and Arshia Fatima Haq at the Biosphere 2, entitled cyclic, presented by MOCA Tucson. Coming up in 2020 is a survey of his output, curated and organized by the Art Historian and Roski chair, Amelia Jones, set to show at Participant, Inc. NYC; and other venues nationally, which will include set pieces, costumes, and photographs.
Aethey, performance, Ron